Prue is one of the country’s foremost authorities on all things culinary.  Currently best known as one of the judges on the hit TV series "Great British Bake Off’ There is a long and illustrious past which led her to this position.

Prue says that she learnt to eat as a student in Paris, learnt to cook in London, and opted for the kitchen because she did not want to work in an office. Then she fell in love with business and enterprise, and ended up with the Leith’s group of companies (School of Food and Wine, Leith’s Events and Parties and Leith’s Restaurants) from an office. While running the group she wrote food columns successively for the Daily Mail, Sunday Express, Guardian and the Mirror, and produced twelve cookbooks, among them Leith's Cookery Bible which stands the test of time as a classic. Written by Prue Leith and Caroline Waldegrave as the most authoritative and comprehensive cookbook there is for seasoned cooks and beginners, chefs and caterers. She also became the active Patron of a new and subsequently extremely successful Chefs school in South Africa, The Prue Leith Culinary Institute.

During her time as a caterer and restaurateur Prue became a sought-after non-executive director for major companies. Her first appointment was to the board of British Rail which until the Seventies, was the butt of many jokes about curled-up sandwiches. Prue stormed in and, like a whirlwind, transformed British Rail’s catering fortunes with the addition of – shock horror – brown bread, generous fillings and the (then revolutionary) sandwich box.

Leith was also appointed to the boards of Safeway, Whitbread, Woolworths, Belmond (formerly Orient Express Hotels) and others and was instrumental in setting up several educational charities, mostly concerned with teaching children to cook and eat well, training disadvantaged young people in the restaurant trade, and improving school food.

When Prue sold her business in 1993 she employed 500 people, her flagship restaurant had a Michelin star and Prue had won the Veuve Clicquot Businesswoman of the Year award, and been honoured by the Queen with first an O.B.E. and then a C.B.E. Spring 2021 has seen Prue honoured in the Queens Birthday Honours list with a ‘Damehood’ given to her as an acknowledgement to her services to food, broadcasting, and charity.

Her plan on selling the business was to give up food-related business and devote herself to writing fiction rather than cookery. She did indeed write 8 novels and an autobiography, Relish, and has for many years now been a guest writer for the Spectator and the Oldie magazines and writes occasional pieces for most of the national newspapers.

2020 saw Prue and her adopted daughter Li-Da, bravely take a camera crew with them on an emotional journey to Cambodia, Li-Da's place of birth, in Channel 4's intimate documentary, ‘Journey With My Daughter’.

Prue has since made a Channel 4 series, ‘Prue’s Great Garden Plot’  which follows Prue and her husband packing up their old family homes and moving into a new build and a bare plot left by the builders, creating a garden from scratch in a year.

After a twenty-year break from food-writing Prue returned to cookbooks with ‘Prue’ which draws on a life-long passion for food with a hundred recipes from her own kitchen table. This was followed by ‘The Vegetarian Kitchen’ written by Prue and her chef niece Peta Leith. With over 100 delicious, heart-warming vegetarian recipes with vegan alternatives.

In her time, she has chaired the Royal Society of Arts, The Restaurateurs Association, UK Skills, Forum for the Future, Ashridge Management College, and 3E’s, a not-for-profit education company that turned round failing schools. In 2007 she was appointed the Chair of the School Food Trust, set up by the British Government to change the diet of the nation through teaching children at school about food and persuading them to eat healthily.

In 2017, she became Queen Margaret’s University’s Edinburgh Chancellor, reflecting the affinity of her interests and experience with the University's expertise in food and drink, sustainable business, creativity, the arts and culture, and one of its fundamental values, social responsibility. This is a role she still currently holds. 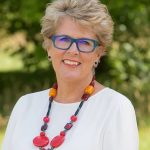